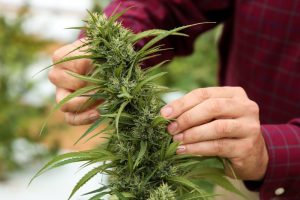 This is where Georgia’s future hemp crop begins: in a pungent field at the University of Georgia, where several dozen cannabis plants are nearly ready for harvest.

The plants are lined in rows on one-third of an acre, sprouting fuzzy flowers that could be processed into CBD oil, the popular product sold as a treatment for a variety of conditions including pain and insomnia.

Tim Coolong, a university horticulturist, is growing the plants in preparation for farmers to start growing hemp across the state next year. Lawmakers voted this spring to legalize in-state hemp production. Currently, all CBD oil products are imported to Georgia.

Coolong is researching how well hemp grows, its yield per acre and which varieties prosper in Georgia’s hot and humid climate — information he’ll pass along to farmers eagerly awaiting the rare opportunity to cultivate something new and potentially profitable. His plants aren’t for sale; they’re composted after being evaluated.

“Our farmers could absolutely grow this,” Coolong said. “The cool thing about these plants is that they offer an advantage to Georgia farmers because we have a long growing season.”

Georgia farmers will jump into the booming hemp industry as soon as federal and state regulations are approved, a process that could be completed in the next few months.

Thirty-five states are already growing commercial hemp, and Georgia is positioning itself to become a significant producer within a few years. CBD retail sales are expected to reach about $1.2 billion nationwide this year and increase to $6 billion in 2022, according to Hemp Industry Daily.

Like marijuana, hemp comes from cannabis but contains little or no THC, the compound that gives marijuana users a high. State inspectors will test hemp to ensure it contains less than 0.3% THC.

Coolong planted Georgia’s first hemp fields in June after acquiring plant material primarily from the Carolinas. He grew 24 varieties at campuses in Watkinsville south of Athens, near Blairsville in North Georgia and in Tifton in South Georgia. Those plants were harvested a few weeks ago, and a second crop that was planted in early August will soon be ready.

Some varieties grew as tall as 9 feet. Others barely got off the ground.

“My goal is to provide information so that growers don’t pick the wrong variety and end up making a mistake that costs them several million dollars potentially,” Coolong said.

Hemp will likely grow well across Georgia, but it seems to prosper in the slightly cooler climes of the northern Georgia mountains, he said. Farmers in South Georgia will have to be more careful to choose varieties of hemp that can survive.

The crop will come with challenges. It takes a lot of labor to harvest, dry and strip the plants, Coolong said. In addition, planting costs are high — $3 or $4 for each rooted cutting that will be planted.

Down the street from the UGA hemp fields in Watkinsville, a hemp processing company called GA Xtracts is equipped to test and process hemp plants, turning leafy green material into brown or golden oil. The company plans to make tinctures, lotions, ointments, soaps and pills.

“We’re hoping CBD and hemp becomes a brand for Georgia, where the state is associated with it just like Vidalia onions, California raisins and Idaho potatoes,” said Don Barden, the CEO for GA Xtracts. “We’re going to be a global leader.”

Because Georgia has more sunlight and a longer growing season, it could eventually exceed Kentucky’s hemp market, one of the largest in the nation, said Rob Lee, a co-founder of GA Xtracts. The company hopes to begin processing hemp from other states by the end of the year and then add Georgia-grown hemp in 2020.

The South is already a major player in the U.S. hemp industry, led by Kentucky, Tennessee and North Carolina when measured by licensed acreage, according to Hemp Industry Daily. Colorado has the most licensed acres for hemp production in the nation, with 80,000.

“The demand is through the roof,” Lee said. “Although it can’t be grown here in Georgia right now, it’s being sold everywhere.”

Georgia’s hemp production will likely start slowly, said Albert Etheridge, a co-founder of Pretoria Fields Collective, an Albany beer brewer that’s building a hemp processing lab. He expects a lot of farmers will initially try to grow between 1 and 5 acres, then ramp up operations if they’re successful.

“Everybody’s going to take a wait-and-see approach, and then it will grow up quite substantially,” Etheridge said. “I think it’ll go gangbusters.”

Several steps remain before the hemp industry can begin in Georgia.

Seventy-two people submitted public comments this summer about Georgia’s proposed regulations, with many saying that they’re overly restrictive. The regulations prohibit hemp farmers from selling to anyone but processors, and hemp couldn’t be shipped outside Georgia even though out-of-state producers could bring their product here.

Farmers and processors say they hope government regulations are finalized in time for the spring 2020 planting season.