Industrial hemp advocates hope this is their year in Annapolis

The industrial hemp plant has a lot of boosters.

They praise it for its hardiness and versatility. They say its oils yield food and medicine, its fibers produce clothing and plastic-like auto parts. They contend that when planted strategically, it can absorb manure and other pollutants before they flow into the Chesapeake Bay.

So why is it contraband, they ask?

Advocates for industrial hemp hope this is the year they can overcome the hemp plant’s association with marijuana and win passage of a bill that would make it legal to grow and process in Maryland. At a forum Friday in Annapolis, they expressed confidence this will be the year state lawmakers join a growing national movement to distinguish hemp’s industrial version from the plant beloved by millions of potheads.

“Hemp is an extremely useful plant and hemp isn’t about getting stoned,” said Rona Kobell, who wrote a report for the Abell Foundation making the case for the plant in Maryland. “There’s no reason it should be illegal.”

But illegal it is at the federal level and in most states, Maryland among them. While a growing number of states have dropped their statutory prohibitions on growing industrial hemp and processing it for use in products, Maryland law still treats the plants as identical to their buzz-producing cannabis cousins.

Kobell, a former Baltimore Sun reporter who moderated the forum in a dress and boots made of hemp, said Maryland has missed the opportunity to be first in developing a homegrown hemp industry but still has time to avoid being last.

She noted that conservative-leaving Kentucky is moving forward with developing a hemp industry with the support of Republican U.S. Sens. Mitch McConnell and Rand Paul. Another 18 states — including Virginia and Pennsylvania — have given the green light to hemp, notwithstanding federal law. Unless the state bill passes, Maryland law would change only if Congress ends the federal prohibition.

Sarah Manekin, research director of the urban-oriented Abell Foundation, said she was surprised when Abell President Robert C. Embry Jr. asked her to launch a hemp study. But Manekin said the foundation’s research found ample benefits for Baltimore, pointing to empty warehouses that could be used for processing plants and Under Armour’s interest in innovative textiles.

“All these things can also support Baltimore city,” she said.

Michael Renfroe, a professor of biology at James Madison University in Virginia, said industrial hemp and marijuana plants are both of the species Cannabis sativa. But the resemblance ends there, he said. Even though they’re the same species, he said, marijuana and industrial hemp are as different and easily distinguishable as a chihuahua and a golden retriever.

Marijuana plants in the field are short and bushy, Renfroe said, while industrial hemp grows tall and straight. The high users get from marijuana comes from the hallucinogenic substance THC. Industrial hemp has only trace amounts, he said.

“You can’t get high from it,” Renfroe said. “This requires THC.” 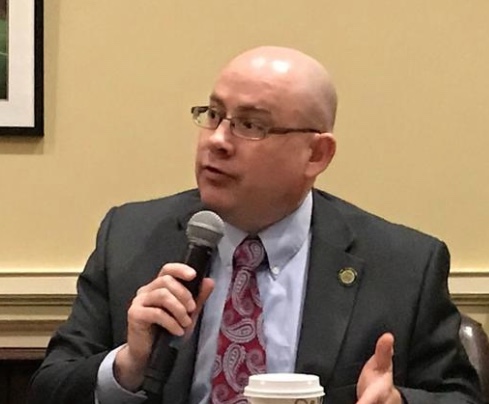 This year, as for the last several years, Del. David Fraser-Hidalgo is taking the lead in sponsoring legislation that would authorize both growing and processing operations for hemp.

The Montgomery County Democrat said that in past years, lawmakers couldn’t get over the association with marijuana, which the federal government still puts in the same category as heroin. Last year, he said, the bill lost momentum when the state Department of Agriculture put a high price tag on the laboratory work needed to certify industrial hemp as THC-free.

Fraser-Hidalgo said that this year he’s optimistic that the cost issues have been resolved and that the administration of Gov. Larry Hogan will be on board.

The Governor’s Office is neither endorsing nor opposing the measure.

“Our office is aware of the issue and looks forward to seeing it debated in the General Assembly,” Hogan spokesman Doug Mayer said.

It is not clear whether law enforcement agencies would take a stand. Baltimore County State’s Attorney Scott Shellenberger, who frequently speaks for the state’s prosecutors, said he was not familiar with the issue. A spokesman for the state’s sheriffs could not be reached.

Proponents of industrial hemp contend the plant has environmental value to match its usefulness. Renfroe said its resistance to weeds makes dangerous herbicides unnecessary. With a short growing season, he said, it has potential as a cover crop to protect the bay from excess fertilizer runoff.

Anna Chaney, an Anne Arundel County landowner who is interested in growing hemp on her farm, said she sees industrial hemp as a potential soil decontaminant. She said many Southern Maryland farmers would welcome the opportunity to add the crop.

Alex Hempfield, a Montgomery County entrepreneur, whose Livity Foods LLC makes 40,000 hemp-based Everbar protein bars a day at his Rockville facility, said that if Maryland legalizes hemp-growing he’ll be able to tap local growers such as Chaney for raw materials. Now, he said, he gets most of his hemp from Canada. (Unlike marijuana, it is not illegal to merely possess industrial hemp.)

Colby Ferguson, government relations director for the Maryland Farm Bureau, said the organization supports giving farmers the freedom to grow industrial hemp. But he said the group may not take a formal position backing the bill out of a concern its members could get in trouble with federal authorities.

“We’re definitely not going to be trying to kill the bill by any means,” Ferguson said. “If it passes, we’ll be happy.”