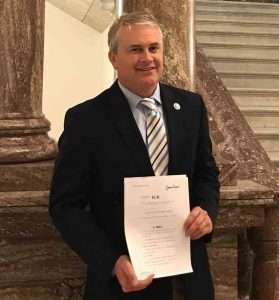 On Friday Rep. James Comer (R-KY) introduced H.R. 3530, a new version of the Industrial Hemp Farming Act along with 15 cosponsors. The bill gained support from Judiciary Chair Goodlatte (R-VA) and has several new provisions. We are excited about the added support which opens up a path for passage in the House this year. We are also pleased that several changes we advocated for were included in the new bill: inclusion of Native American tribes and a provision which will allow for research on hemp with THC levels of up to 0.6% THC (we advocated for more but this was the compromise).

We did our best to work with the bill sponsors to ensure that the bill would give states the authority to regulate hemp production and support all sectors of this growing industry. However, we are concerned with, and opposed to, several new provisions which were added to the bill and that we will work to remove or amend.
We look forward to working with House and Senate members to amend the bill so that these harmful and restrictive provisions are changed or removed.
We congratulate and thank Rep. Comer, Rep. Polis and Rep. Massie who have worked hard to support the industry and come up with the best bill possible. We recognize that compromise is part of the political process, however we are committed to passing legislation that will will help the hemp industry grow and allow states, not the Federal Government, to regulate this crop.
We sincerely appreciate your ongoing support which allows us to continue our work and to keep you informed.