NC lawmakers want to ban smokable hemp, but farmers got a ‘win’ Wednesday 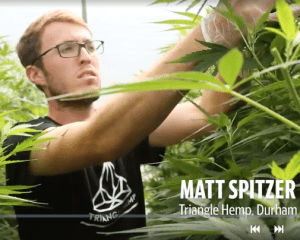 Farmers may get to grow and sell smokable hemp for another year.

A legislative committee on Wednesday endorsed changes to the Farm Act, a bill intended to regulate the hemp industry, that would ban smokable hemp in late 2020.

The proposed ban isn’t ideal for hemp advocates. But lawmakers viewed it as a compromise between farmers who want to legalize hemp indefinitely and law enforcement officers who want to ban it immediately.

Taylon Breeden, who works for the Simply Extract hemp oil company near Asheville, said she was encouraged by Wednesday’s vote. She became a hemp activist after she was diagnosed with Crohn’s disease, which affects digestion.

The previously proposed 2019 ban would be “devastating,” for farmers, Breednen said. “This was a win for us,” Breeden said. “We didn’t think that this would be the case at all.”

The bill, passed by the Senate earlier this year, still needs approval from the House and Gov. Roy Cooper to become law.

North Carolina loosened its hemp laws in 2015. After state Sen. Brent Jackson of Sampson County proposed the Farm Act to expand the industry even further, law enforcement groups spoke out against the spread of hemp flower.

Hemp looks and smells like marijuana — it’s green and has a skunky odor — but it can’t get users high because it has only a small amount of the chemical THC. Prosecutors and cops say the similarities between the plants complicate drug investigations.

Their position was emphasized in Wednesday’s meeting when Wake County District Attorney Lorrin Freeman, a Democrat, said local police were recently able to arrest a felon with a firearm after smelling the marijuana odor from his car.

“This is a public safety concern,” she said.

Until Wednesday, the bill included an amendment to ban smokable hemp this December. The proposed December 2020 ban gives lawmakers another year to find a kit that can help police test for THC in hemp.

The bill had been stalled for a few weeks. But it advanced out of the House Judiciary Committee Wednesday after a change in position by Rep. Jimmy Dixon, a Republican from Duplin County.

Dixon previously said the legislature was putting the “cart before the horse” for approving smokable hemp before law enforcement agencies adopted a cheap, reliable method for testing for THC. He previously proposed a ban starting Dec. 1, 2019.

But Wednesday, Dixon stood next to Jackson in the committee and asked committee members to support a ban starting in December 2020.

“There’s not yet been a bill proposed in this committee or any other committee that would solve law enforcement’s concerns. The General Assembly does not have the ability to do that,” Dixon said. “This is ultimately going to be resolved in the courts.”

It’s unclear whether the full House will support the proposal from Dixon and Jackson, both Republicans.

State Rep. Allen McNeill, a Randolph County Republican, said he’d support the bill Wednesday to advance it out of the committee. But he said he’s not sure if he’ll vote for it on the House floor.

State Rep. Brandon Lofton, a Democrat from Mecklenburg County, pointed out that the reverting the bill to Jackson’s version would undo amendments adopted in other House committees.

Dixon suggested that Lofton shouldn’t tie his hopes to one version of any bill.

Help us bring back commercial hemp farming in the U.S.