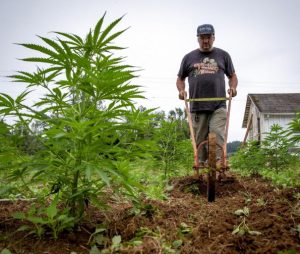 The Oregon hemp industry is booming, but still faces an uncertain future.

A lack of consistent testing policies, outdated U.S. Department of Agriculture regulation and rules, and problems with banking were some of the issues behind the urgent tone at a recent Oregon hemp farmer roundtable discussion hosted by U.S. Sen. Ron Wyden at the University of Oregon Downtown Innovation Hub.

Farmers sat alongside industry lobbyists, scientists, professors, designers, producers and Oregon Department of Agriculture officials, expressing their concerns for the future of the industrial hemp business and crop. Despite the uncertainty, Wyden said the level of commitment from industry professionals makes Oregon the perfect state to lead the industry.

“We’ve got it all right around this table,” the Oregon Democrat said during the early July roundtable. “We’ve got essentially the modern leadership to tap the incredible potential for hemp growth in Oregon. And Oregon, as is our tradition, can be a trailblazer with addressing these issues.”

In 2018, Wyden led the charge to legalize hemp with legislation in the 2018 Farm Bill. Wyden’s work alongside Republican Senate Majority Leader Mitch McConnell made it possible for the Hemp Farming Act of 2018 to become a bipartisan piece of legislation included in the final bill that passed in December.

The bill defined hemp as an agricultural commodity and ultimately removed it from the controlled substance list. The legislation allows for interstate commerce and crop insurance. States are federally required to regulate and inspect hemp farms, but the act gives them the ability to be the primary regulators of hemp production.

Because hemp is now labeled as an agricultural commodity, the USDA is in charge of regulating it instead of the U.S. Department of Justice. Unfortunately, the USDA and the U.S. Food and Drug Administration have not issued updated policies and regulations hemp industry professionals need. These regulations would determine testing and production specifications the industry abides by. Without them, farmers risk losing thousands of dollars because their current crops may not be in compliance.

The lack of industry standards is what Liz Gale, farmer and owner of Living Harvest Farm LLC in Dallas, Ore., said made the roundtable meeting extremely important because farmers need to know what’s going on.

“Things change all the time,” Gale said. “The plants that I have in the ground right now, what’s all decided around these tables, is going to determine whether I can sell it or not at the end of the year.”

Gale said she’s grown medicinal and recreational crops in the past but hemp creates new opportunities. For Gale, a mother of two sons, hemp farming is a family business.

“If you can sustain your family, and generationally have family farms with hemp crops, that’s where I think hemp will change America,”  she said.

Unfortunately, the industry needs to cut through red tape before it can change much of anything. A big part of the issue comes down to testing the plants and defining THC.

While marijuana and hemp are cannabis plants, hemp has a low THC concentration. THC, or delta-9-tetrahydrocannabinol, is the concentrated psychoactive chemical in marijuana that makes users feel high. The Oregon Department of Agriculture issued rules saying that hemp can’t contain more than 0.3% total THC.

Total THC is the sum of delta-9 THC and THCA, an acidic cannabinoid found in the cannabis plant. Different testing methods at different labs may impact how the substances are measured and reported. According to Sunny Summers, Cannabis Policy Coordinator for ODA, the language in the farm bill isn’t clear.

“Testing consistency is a big concern and struggle for the industry,” Summers said. “I want hemp to be hemp in Oregon, in Kentucky, or whatever state it was grown in. I want it to be the same.”

Sean Beeman, co-founder of Genesis Pharms, is concerned that with testing issues, the booming industry that is Oregon hemp will come to a halt by harvest time. Beeman is most concerned about the increase in growers with little to no experience.

“Every grower I know or meet, both cannabis and hemp, are just too excited lately,” Beeman said. “There are too many people who think they can use their ag experience to make money. The reality is, just because you can farm corn, doesn’t mean you can farm hemp.”

According to Beeman, some agriculture farmers are jumping into the industry to make a profit and cutting corners to get past testing regulations. Despite the fact that the industry skyrocketed, Beeman said there’s a supply-and-demand issue when it comes to processing hemp, and ODA’s regulations are negatively impacting that.

“The bubble we have lived in this past year has popped and will not be back,” Beeman said. “The ODA has now updated the rules and these new rules greatly reduce the value and the possible positions farmers will find themselves in come harvest time.”

There are 1,642 registered hemp farmers in Oregon compared to 584 registered last year. According to the ODA, those farmers have registered to plant more than 53,000 acres. In an effort to further help the industry and protect farmers, Oregon State University will take the lead on certifying hemp seed for registered Oregon growers. This will ensure the seed and, eventually, the hemp crop, remain up-to-date with state and federal industry specifications.

In June, OSU unveiled its Global Hemp Innovation Center, the largest hemp lab in the country. Hemp researchers are now eligible to receive competitive federal grants through the USDA, under the farm bill legislation. The lab aims to innovate across several fields including food, product testing and cultivation by combining 40 members of OSU faculty, working across 19 academic disciplines to help address hemp’s full potential.

While innovation is underway, business owners still are suffering. Hemp CBD companies are struggling to find credit unions and banks to work with, despite hemp being legal because it’s still a cannabis plant. U.S. Bank and its subsidiary, Elavon, made headlines when they cut ties with the CBD industry earlier this year.

Local hemp farmer Douglas Bergren agrees that there are significant banking issues for Oregon hemp farmers. Bergren and his wife Jenifer own Greenlogic LLC and the Lay Low Ranch hemp farm in Lane County. The couple is struggling to find a bank that will allow them to open a business account. Three of the company’s bank accounts — two this year alone — were canceled because it’s a hemp-based company.

“We are at the point where we can have personal accounts, but we can’t have one for our business,” said Bergren, who did not attend Wyden’s roundtable. “Our hands are tied.

It’s also been a struggle to find crop insurance, Bergren said. While the bill allows hemp farmers the ability to insure their crop, insurance companies are still turning farmers such as Bergren down. The couple say they feel incredibly fortunate to have their farm and to be able to work in the industry, but not having banking services for their business or the ability to insure their crop puts their company at risk every season.

“We’re losing the ability to function as a business, directly to retail,” Bergren said. “We have to work on a wholesale basis. For every one sale we make, we have to turn 10 people down.”

Hemp can be used as a renewable resource for paper, building materials, textiles and health products. A major market also has grown out of CBD, or cannabidiol, and its potential for food or health supplements. The CBD market is estimated to grow from $618 million in 2018 to $22 billion by 2022, according to the Brightfield Group, an analytics firm that tracks the cannabis industry.

While there are a few financial institutions that support CBD-based companies, others view the lack of regulation from the FDA as a risk.

In a June 2019 press release, the FDA said it was actively evaluating the framework surrounding regulations for non-drug use of cannabis-derived products and would consider what legislation or regulatory updates should be made.

Wyden said he received a letter from the FDA saying the agency would need three to five years to evaluate regulations.

“I am going to bring the Food and Drug Administration kicking and screaming and hollering in to getting these issues resolved,” said Wyden, calling it regulatory underbrush that needed to be handled.