Kentucky farmers plan to grow the lowest amount of burley tobacco on record this year, according to a new report.

The U.S. Department of Agriculture’s National Agricultural Statistics Service recently released its “Prospective Plantings” report showing burley tobacco growers in Kentucky intended to set 57,000 acres for harvest — 6,000 acres below last year and 1,000 acres lower than 2015, which was the previous record low. Burley tobacco is primarily used for cigarettes and Kentucky produces more than two-thirds of the nation’s output. 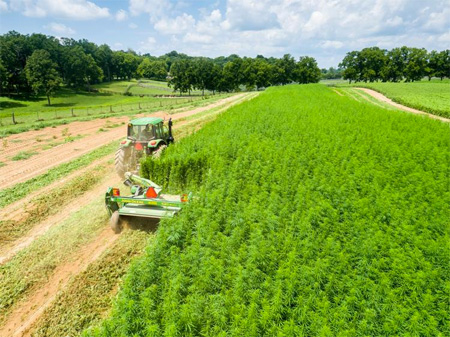 Kentucky Agriculture Commissioner Ryan Quarles said despite the dip in production, tobacco still remains a significant economic driver for Kentucky. However, he said the state has done a good job of diversifying its agricultural portfolio in the years since the tobacco buyout.

“There’s no shortage of what Kentucky farmers are growing these days,” Quarles said. “I like to say that in Kentucky, we grow apples to zucchini and everything in between.”

The ag commissioner said his administration has placed an emphasis on experimental crops, such as industrial hemp, hops and kenaf.

“Other states are looking to Kentucky when it comes to expanding their ag portfolio,” Quarles said.

“When I became Commissioner of Agriculture, I wanted to make Kentucky a national leader in industrial hemp research,” Quarles said. “These numbers demonstrate the economic potential of this emerging industry right here in Kentucky. It is time to remove industrial hemp from the list of controlled substances for our farmers and processors, so we can remove uncertainty from this versatile crop.”

Hemp producers may finally get that certainty after U.S. Senate Majority Leader Mitch McConnell, R-Ky., and Senators Ron Wyden, D-Ore. and Jeff Merkley, D-Ore., this month introduced the bipartisan Hemp Farming Act of 2018, which would legalize and clearly define hemp as an agricultural commodity and remove it from the list of controlled substances.

“I am proud to introduce the bipartisan Hemp Farming Act of 2018, which will build upon the success of the hemp pilot programs and spur innovation and growth within the industry,” McConnell said when announcing the legislation. “By legalizing hemp and empowering states to conduct their own oversight plans, we can give the hemp industry the tools necessary to create jobs and new opportunities for farmers and manufacturers around the country.”

Quarles said it would be a big boost to Kentucky farmers if hemp were removed from the controlled substances list.

The Hemp Farming Act of 2018 hopes to build upon the past successful bipartisan efforts by McConnell, Wyden, and Merkley, who in 2014 helped legalize hemp pilot programs and in 2016 sought clarification for farmers after three federal agencies issued new guidance that conflicted with current laws governing the growing and selling of industrial hemp.