WASHINGTON, DC – Vote Hemp, the nation’s leading grassroots hemp advocacy organization working to change state and federal laws to allow commercial hemp farming, has released final estimates of the size of the 2016 U.S. retail market for hemp products.  Data from market research supports an estimate of total retail sales of hemp food, supplements and body care products in the United States at $292 million.  Sales of popular hemp items like non-dairy milk, shelled seed, soaps and lotions have continued to increase, complemented by successful hemp cultivation pilot programs in several states, and increasing grassroots pressure to allow hemp to be grown domestically on a commercial scale once again for U.S. processors and manufacturers.  Vote Hemp and Hemp Business Journal have also reviewed sales of clothing, auto parts, building materials and various other products, and estimates the total retail value of hemp products sold in the U.S. in 2016 to be at least $688 million. 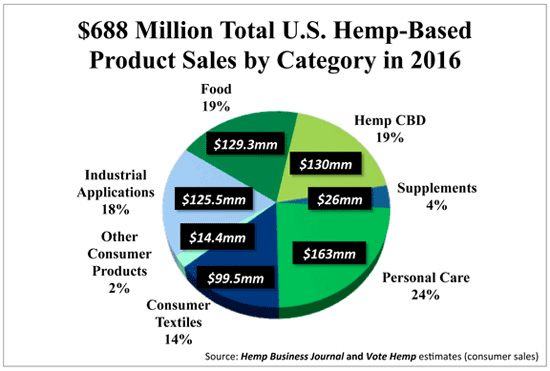 The sales data on hemp foods and body care, collected by market research firm SPINS, was obtained from natural and conventional retailers, excluding Whole Foods Market, Costco, Alfalfa’s Market, and certain other key establishments, who do not provide sales data — and thus it significantly underestimates actual sales.  According to the SPINS data, combined 2016 sales of U.S. hemp food, body care, CBD products and dietary supplements grew in the sampled stores by 24.64% or approximately $23 million, over the previous year 2015, to a total of nearly $117 million.  According to SPINS figures, sales in conventional retailers grew by 36.54% in 2016, while sales in natural retailers grew by 11.64%. Indeed, the combined growth of hemp retail sales in the U.S. continues steadily: annual natural and conventional market percent growth has progressed from 7.3% (2011), to 16.5% (2012), to 24% (2013), 21.2% (2014), 10.4% (2015),
to nearly 25% in 2016.

“Vote Hemp estimates the total retail value of all hemp products sold in the U.S. to be at least $688 million for 2016,” said Eric Steenstra, President of Vote Hemp.  “To date, 32 states have passed legislation that allows hemp farming per provisions set forth in the 2014 Farm Bill, and the U.S. remains the largest consumer market for hemp products worldwide. However misguided drug policy still prevents our farmers from cultivating hemp at the scale needed to meet consumer demand, so instead nearly all the hemp to supply the U.S. market is imported. We need Congress to pass federal legislation to allow commercial hemp farming nationally, to let our farmers and American business take advantage of the robust economic opportunity hemp provides,” continued Steenstra.

Data was gathered and analyzed in partnership with Hemp Business Journal, the leading provider of market intelligence to the hemp industry.  Sean Murphy, founder and publisher of Hemp Business Journal said, “The hemp industry is being lead by the Natural Products channel. Food and personal care categories have traditionally lead the industry and continued to do so in 2016. The emergence of Hemp CBD—a category growing at 53%—drove the hemp industry to a total market size of $688 million. Hemp Business Journal estimates $130 million in hemp industry sales is from the Hemp CBD category, nearly 20% of the total market.  This category is being driven by channel sales in the Natural Products Industry, smoke shops and online verticals, with pharmaceutical players quickly moving into position to capture market share.”

Vote Hemp has calculated that approximately 9,650 acres of hemp crops were planted in 15 states during 2016 in the U.S., 30 universities conducted research on hemp cultivation, and 817 State hemp licenses were issued across the country. This hemp cultivation is legal in 32 states, which have lifted restrictions on hemp farming and may license farmers to grow hemp in accordance with Sec. 7606 of the Farm Bill, the Legitimacy of Industrial Hemp Research amendment. To view the Vote Hemp 2016 Crop Report, which gives a state-by-state breakdown of hemp acreage grown in 2016, please visit:

Vote Hemp is a national, single-issue, non-profit organization dedicated to the acceptance of and a free market for low-THC industrial hemp and to changes in current law to allow U.S. farmers to once again grow the agricultural crop. More information about hemp legislation and the crop’s many uses may be found at www.VoteHemp.com or www.TheHIA.org. Video footage of hemp farming in other countries is available upon request by contacting Lauren Stansbury at 402-540-1208 or lauren@votehemp.com.

Historic Hemp House built in Lawrence County Great story about the first complete hemp home rebuild in Pennsylvania! Nice to see it is being built for to help out someone disabled. We need more hemp home projects ...

Ms. Rockefeller's Cannabis Farm Once upon a time, a forward-thinking heiress met an eager younger farmer who persuaded her to grow 10 acres of magical plants on her upstate New York farm.

Court dismisses HIA lawsuit against DEA A federal judge this week dismissed a lawsuit filed by the Hemp Industries Association (HIA) and RE Botanicals Inc. against DEA. A related lawsuit, however, remains pending in an appeals ...

Any guesses as to what that number is today???

All 👏 Of 👏 This 👏
#Repost @organiccowboy
・・・
As we continue to enjoy last season’s hemp seed superfood harvest here on the Funky Butte Ranch, I keep thinking about ...

We are sad to learn of the passing of hemp trailblazer Dave Seber who developed Hemp Shield wood protector. RIP

As Lumber Prices Surge, Hemp Blocks Get a Closer Look — HempBuild Magazine The cost of U.S. construction timber is skyrocketing, and a national concern is growing for the carbon emitted by the construction industry. As homebuilders look for solutions, the nation’s small-but-growing ...

Sounds like our kind of place ✌️
#Repost @letstalkhemp
・・・
"And so, that’s what you’ll be able get at Hemp Bar, which had its grand opening at 6258 SE Foster ...

Michigan bill would tighten marijuana definition to include hemp-derived intoxicants The Michigan State House, with bipartisan approval, passed legislation to close a gap in the state's marijuana law that has allowed untested, hemp-derived products to be sold.
According to the ...