WASHINGTON, DC – Vote Hemp, the nation’s leading grassroots hemp advocacy organization working to change state and federal laws to allow commercial hemp farming, has released final estimates of the size of the 2017 U.S. retail market for hemp products.  Data from market research by Hemp Business Journal supports an estimate of total retail sales of hemp food, supplements and body care products in the United States at $553 million.  Sales of popular hemp items like non-dairy milk, shelled seed, soaps and lotions have continued to increase, complemented by successful hemp cultivation pilot programs in several states, and increasing grassroots pressure to allow hemp to be grown domestically on a commercial scale once again for U.S. processors and manufacturers. Hemp Business Journal has also reviewed sales of clothing, auto parts, building materials and various other products, and estimates the total retail value of hemp products sold in the U.S. in 2017 to be at least $820 million. 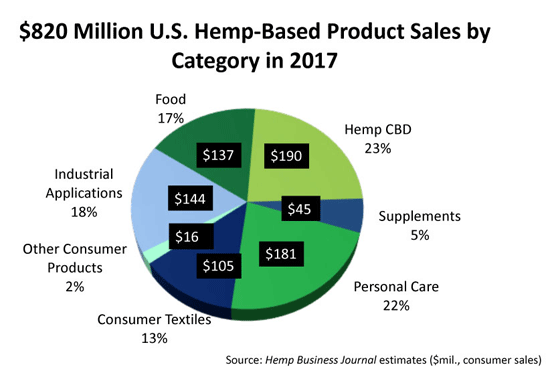 “As the U.S. hemp market continues to grow at a double digit pace annually, American consumers continue to demonstrate their strong interest in hemp products,” said Eric Steenstra, President of Vote Hemp. “We expect the rate of growth of the market to increase, as Congress has indicated its intention to finally lift federal prohibition on industrial hemp farming. Few other industries can so clearly prove the market demand for their products, whereas the hemp market has essentially tripled in the last 5 years as hemp farming advocates have made advancements in legalizing the crop at the state and federal levels,” he continued.

On April 12, 2018, Senate Leader Mitch MConnell (R-KY) with strong bi-partisan support from Senator Ron Wyden (D-OR), and further support from Senator Jeff Merkley (D-OR), introduced The Hemp Farming Act of 2018. If passed, the bill would place federal regulatory authority of hemp solely with USDA and require State departments of agriculture to file their hemp program plans with USDA but allow them to regulate hemp cultivation per their State specific programs. In addition to defining hemp as cannabis that contains no more than 0.3% THC by dry weight, the bill asserts a ‘whole plant’ definition of hemp, including plant extracts; and would remove roadblocks to the rapidly growing hemp industry in the U.S., notably by authorizing and encouraging access to federal research funding for hemp, and remove restrictions on banking, water rights, and other regulatory roadblocks the hemp industry currently faces. The bill would also explicitly authorize crop insurance for hemp.

The full text of the bill may be found at: The Hemp Farming Act

Vote Hemp has calculated that approximately 25,712 acres of hemp crops were planted in 19 states during 2017 in the U.S., 32 universities conducted research on hemp cultivation, and 1,456 State hemp licenses were issued across the country. This hemp cultivation is legal in 39 states, which have lifted restrictions on hemp farming and may license farmers to grow hemp in accordance with Sec. 7606 of the Farm Bill, the Legitimacy of Industrial Hemp Research amendment. To view the Vote Hemp 2017 Crop Report, which gives a state-by-state breakdown of hemp acreage grown in 2017, please visit: