Hemp in the Farm Bill, what does it mean? 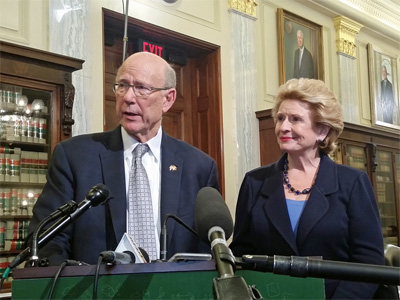 When Congress passed the Farm Bill of 2014, it included Sec. 7606 authorizing state regulated research pilot programs with hemp. That program has been a huge success growing to include over 3,500 licensed participants who planted more than 77,000 acres in 2018. At the same time, the U.S. market for hemp products has grown to more than $800 million as of 2017. However, hemp pilot program regulations are burdensome and are made even more challenging by heavy handed Drug Enforcement Administration oversight. Vote Hemp, along with thousands of businesses and advocates, have been pushing for commercial hemp farming legislation and removal of roadblocks to the growth of the U.S. hemp industry.

Congress has been negotiating a new Farm Bill and is once again considering federal policy regarding hemp thanks to leadership from Senator McConnell (R-KY) and Senator Wyden (D-OR). The House and Senate each passed their versions of the bill and the Senate version included language from the Hemp Farming Act of 2018 that removes hemp from the Controlled Substances Act and allows farmers to grow hemp commercially under a state or federal license.

What will the new Farm Bill hemp law do?

If the Farm Bill is signed into law before the end of 2018, it will go into effect beginning on January 1, 2019. However, it will take time for the new law to be implemented. In states where hemp is legal, state departments of agriculture will need to submit regulatory plans to USDA for approval. Section 7606 does not expire until 1 year after the USDA creates optional regulations for states that choose not to develop programs. This means existing state programs are still valid. However, we urge states to move promptly to create and submit new state regulations to USDA once the Farm Bill is signed into law.

There are a few minimum requirements that a state plan must have:

The USDA will have 60 days to respond with an approval or a reason why the proposed plan doesn’t meet the minimum requirements. If denied, a state can revise and resubmit their plan.

What about hemp extracts containing CBD?
The Farm Bill removes hemp completely from the CSA. It makes is 100% clear that cannabinoids are included so hemp derived CBD will not be a controlled substance. The bill does not change requirements of the Federal Food, Drug, and Cosmetic Act so producers are still subject to FDA regulations. The FDA has stated in an FAQ that it is their current opinion that CBD may not be sold as a dietary supplement but they have not said that whole plant hemp extracts are covered. Their logic is that a previous application for the drug Epidiolex prohibits the sale of the same substance as a dietary supplement. But Epidiolex is pure CBD and is not the same as a whole plant hemp extract. The industry does not agree with FDAs stance on CBD and there will likely be further developments on this.

All 👏 Of 👏 This 👏
#Repost @organiccowboy
・・・
As we continue to enjoy last season’s hemp seed superfood harvest here on the Funky Butte Ranch, I keep thinking about ...

Sounds like our kind of place ✌️
#Repost @letstalkhemp
・・・
"And so, that’s what you’ll be able get at Hemp Bar, which had its grand opening at 6258 SE Foster ...

Won’t you be my neighbor? 😍
#Repost @letstalkhemp
・・・
"Shortly after developing the nation’s first hemp house on wheels, Coexist Build has launched the Traveler, a DIY cabin made from ...

As Lumber Prices Surge, Hemp Blocks Get a Closer Look — HempBuild Magazine The cost of U.S. construction timber is skyrocketing, and a national concern is growing for the carbon emitted by the construction industry. As homebuilders look for solutions, the nation’s small-but-growing ...

Any guesses as to what that number is today???

CBD firms that provide data about supplement effectiveness will outlast competitors "As an industry, if we want consumers to trust CBD products, then we need to give them a reason to do so." <-- Can I get an AMEN?

We are sad to learn of the passing of hemp trailblazer Dave Seber who developed Hemp Shield wood protector. RIP

Michigan bill would tighten marijuana definition to include hemp-derived intoxicants The Michigan State House, with bipartisan approval, passed legislation to close a gap in the state's marijuana law that has allowed untested, hemp-derived products to be sold.
According to the ...

Historic Hemp House built in Lawrence County Great story about the first complete hemp home rebuild in Pennsylvania! Nice to see it is being built for to help out someone disabled. We need more hemp home projects ...